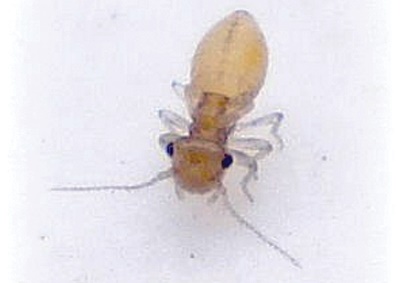 Booklice (Psocids) are very common but harmless household pests. They are not caused by poor hygiene as they are just as common in scrupulously clean homes.

These fast moving, tine, cream-coloured or light brown insects, only 1mm long, occur in small numbers in many premises.

Booklice stick, pearl-coloured eggs and cement them to damp surfaces. Instead of a larval stage, the insect matures through four recognisable nymphal stages, taking about a fortnight to become an adult.

Booklice are always associated with damp. It could be caused by new plaster drying out, condensation from not having enough ventilation in the kitchen/ bathroom, or a leaking water pipe.

Booklice feed on mould caused by damp conditions. They are also believed to feed on microscopic moulds that grow on the glue of book-bindings or on damp cardboard, damp food (especially cereals) or o on the surfaces close to damp plaster inside buildings, which is very common with brand new houses.

Signs of an infestation

Visible mould and damp patches in the affected rooms.

Although they are only 1mm in size you may visibly see these white/cream species on your wall, surfaces, or in your cupboards.

The major problem posed by Booklice is the nuisance they cause, especially when found in large numbers throughout the home. They don’t spread disease, bite or damage your property and possessions. However, their sheer presence can be enough to cause anguish and distress.

How to prevent Booklice?

Prevention is similar to the cure. Try and keep susceptible rooms such as the kitchen and bathroom well ventilated and dry by opening windows as often possible.

Always keep your dry foodstuffs such as cereals in a cool dry well-ventilated place. Cleaning out your cupboards regularly, ensuring they are completely dry before putting your food back will help.

If you are cooking, boiling the kettle or even just using the washing machine for extended periods of time, then make sure that the kitchen is properly ventilated.

How to get rid of Booklice

They do not bite and can be easily eradicated. To resolve the issue we would recommend removing any infested food, wipe away any visible mould, thoroughly ventilate and dry the area where they are found.

Good ventilation is key to success. Opening windows and doors as much as possible to ventilate and dry out the damp is essential. Use of a dehumidifier might help this process. Alternatively, heat the room where they occur to a high temperature as they survive poorly in dry heat

For a heavy Booklice infestation, we would recommend you contact professional pest control company, preferably a member of the BPCA to administer an insecticidal spray treatment to minimise the problem. A trained professional will have the technical knowledge and access to a range of professional use products and equipment which are not available to the public.