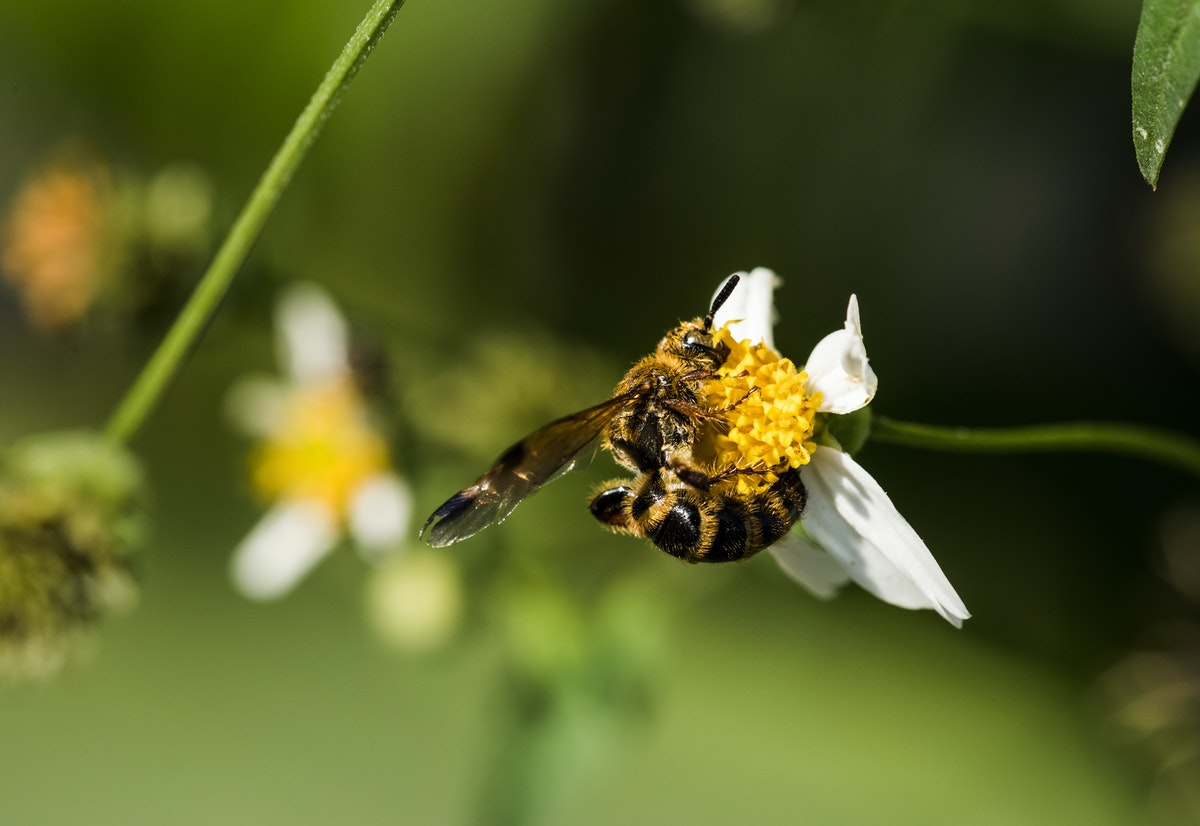 There are over 200 types of Bees in the UK, including 25 types of bumblebees! We’ve listed some of the most common here. Different types of bee may require different treatment methods. Note: pest controllers do not apply bee treatments unless there’s a serious threat to human life. 25% of all bee types are endangered.

They aren’t easily confused with any other bee. They are rounder, larger and furrier and come with a variety of coloured stripes across the end of their tails. Nesting sites are normally found underground in abandoned burrows, bird boxes, under the decking, or in the compost bin.

Bumblebees are social insects: they live in a colony with a queen and her offspring (the workers). Bumblebees have an annual lifecycle, with new nests being started each spring by queens. The queen bumblebees are very large, and from February onwards can be seen feeding on flowers such as willow catkins, bluebells and lungwort, or flying low over the ground searching for a nest site.

Some species prefer to nest underground in abandoned burrows of rodents, while others nest just above the ground in dense grass or leaf-litter. The queen stocks her nest with pollen and nectar and lays her first batch of eggs. She incubates them much as a bird would, sitting on the eggs while shivering her flight muscles to produce warmth.

When the eggs hatch the legless grubs consume pollen and nectar, grow rapidly, and pupate after a few weeks. A few days later the first workers hatch from their pupae and begin helping their queen, expanding the nest and gathering food. By mid-summer nests of some species can contain several hundred workers. At this point, the queen starts laying both male and female eggs.

The females are fed extra food and become future queens. Both males and new queens leave the nest to mate, and the new queens burrow into the ground to wait until the following spring. The males, workers, and the old queen die off in the autumn, leaving the nest to decay.

A recent addition to the UK’s fauna. Their banding is unique amongst the UK species. The thorax is tawny to reddish brown, the abdomen is black and tail is white. Fresh drones have a patch of yellowish facial fur, but this wears off with time. Queens vary significantly in size, and workers are normally quite small.

Some traits of tree bees can be a cause of concern, but there is nothing to worry about. Commonly they establish a nest in bird boxes, or in parts of buildings, and may cause concern through apparent high level of nest flight activity due to ‘nest surveillance’ by drones, and the sound of bee chatter/activity heard through the ceiling are all signs of activity.

As the name suggests, they are solitary insects, and you’ll rarely find them occurring in large numbers. They have a reddish-brown bottom and black body. You’ll see these small bees popping in and out of the wall or very small holes in the ground.

They nest in a wide range of cavities and have the ability to build nests by tunnelling through soft brick mortar, or exploiting pre-existing gaps left unrepaired. They do not cause a problem to your property from a structural point of view.

Providers of honey and almost universally viewed with affection in the UK. They rarely present problems as pests, however, feral swarms can set up home in undesirable places such as chimneys and wall cavities. Honey bees are small and vary in colour from golden brown to almost black.

The most common scenario in which you may become concerned is when they swarm. Typically these intimidating swarms will first set up a temporary camp somewhere nearby, such as a tree branch, fence post and even cars. In almost all cases the swarm will take off again within a day or two to occupy a most suitable permanent home elsewhere.

How to get rid of bees

Contrary to popular belief bees aren’t protected and can be treated, however, they are endangered so we’d always recommend exploring all other avenues before considering eradication. Below is a step by step guide to assist you:

Bees don’t cause any problems to your property, and nor are you in danger of being stung if they are left alone and unprovoked. After the summer season, most bees will go away and not return to the nesting site the following year. By the time a colony has become obvious its activity will be about to decline naturally. Generally, colonies formed in spring usually decline naturally by late July, if not sooner. Therefore If at all possible always bee nests alone to thrive as their presence is actually beneficial for gardeners and their crop.

If a nest is outside or underground then there shouldn’t be a reason to really move it. In more conventional and accessible places such as bushes, trees and sheds, then contacting a local beekeeper or pest controller to relocate the nest is an option. If you suspect you have honeybees and they are causing you problems then we would recommend you use a swarm collector from the British Bee Keepers Association or getting in touch with the Tree Bee Society. In most cases, they will come and collect the swarm free of charge. Some pest management companies have the skills to remove nests from tricky places such as chimneys and cavities. You can find them through our Find a Pest Controller tool.

Only if the location of a nest is dangerous and removal not possible, should the next step be an option.

The decision to treat will depend if it is possible to close the entrance(s) to the nest after treatment. In this circumstance make sure you use a trained professional. We strongly recommend you contact a professional pest control company, preferably a member of the BPCA. A trained professional will have the technical knowledge and access to a range of professional use insecticides which are not available to the public.

Post-treatment requirements will vary depending on the species of bees you have. For bumblebees and tree bees, blocking up access points will prevent non-target bees from entering and getting contaminated, as well as shortening the likelihood of other bees accessing the same area in the future.

For solitary/masonry bees, in the long-term, re-pointing with sound mortar is the only answer. However, this must be thorough as bees hunting for a nest site will soon locate areas that have been missed.

For honey bees, it is essential that entrance points or blocked off, and if possible remove all the honeycomb. Failure to do this will cause robber bees to find the infected honey and take it back to their hive, thus contaminating it.

PLEASE NOTE: Due to ethical reasons, not all pest control companies will treat for bees so you may have to contact multiple companies.

Take a look at our Leaving you bee leaflet for more information on bees.

The Health and Safety Executive’s Wildlife Incident Investigation Scheme refers to bees as “beneficial invertebrates” and should be protected where possible.As a part of a responsible pest management industry, we’ve pledged to educate customers on the benefits of bees as pollinators, their behaviour and their lifecycle – before taking any lethal action.

After talking with you, we agreed that the risk of being stung was low. Please contact us if you feel the threat has changed.

The bee species around your property are very important and beneficial. They do not ordinarily exhibit aggressive behaviour towards humans, therefore leaving them to fulfil their seasonal cycle benefits the ecosystem around your home or premises.

What to do while bees are active

Can I prevent bees from nesting?

If you have further concerns

Having problems with bees?

Search for one of our members who do specialist bee removal work.