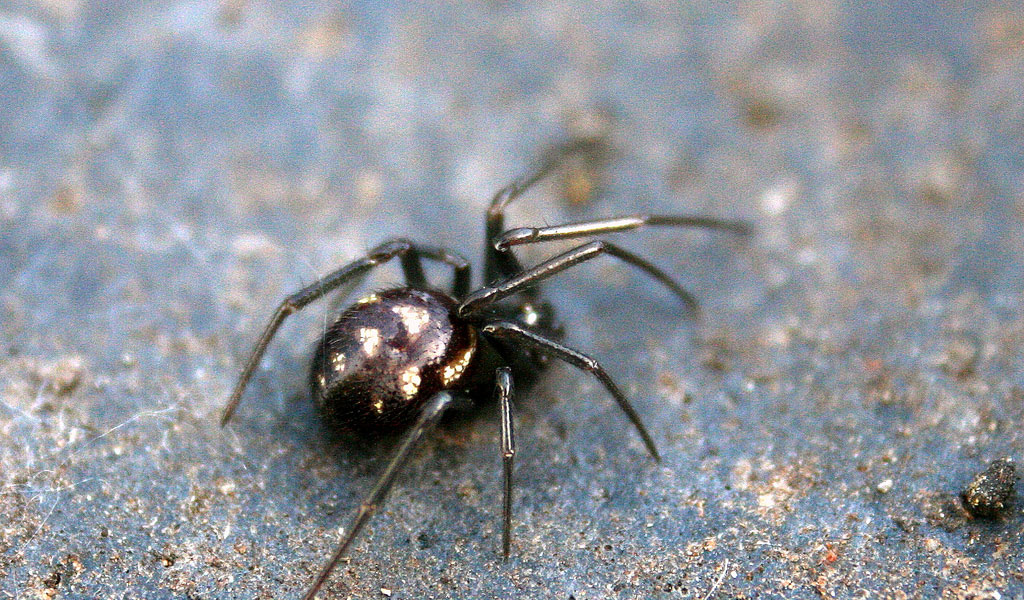 Several spiders in the genus Steatoda are mistaken for the rather deadly Black Widow Spider. These lookalikes are often grouped together as False Black Widow Spiders. While these spiders are venomous and their bites can be very painful, they’re no more dangerous than a wasp sting and the spiders are non-aggressive.

The abdomen of the immature female has pale chevron markings on the dorsal surface and a white band around the anterior, but these diminish with each moult until the adult abdomen is black except for the band, now turned red.

Steatoda nobilis are believed to have been introduced to Devon from the Canary Islands in the 1880s, and has gradually spread northward and eastwards, with most confirmed records lying south of a line from the Wash to Pembrokeshire.

Although Steatoda nobilis was introduced, there are also five other closely related false widow spider species that occur in the UK.

Steatoda grossa and Steatoda bipunctata in particular are widespread and commonly found in sheds, outbuildings and porches as well as within homes.

It’s been tricky to identify the various False Widow Spiders with complete confidence, even using the online images.

This web is often at least 1.5-2m above ground level, and sometimes higher.

The typical locations are around window and door frames, and eaves, but they have been reported from a wide range of other locations including walls, downpipes and gutters, waste pipes, porches, and outbuildings.

The spiders increase in numbers during warmer months, but in late summer and autumn they may become particularly conspicuous as the males wander more extensively in search of a mate. Requests for false widow pest control call-outs tend to peak in October.

False widow spiders are not aggressive and will not launch an unprovoked attack on people.

When bites do occur, it seems to be a result of accidental contact with a spider. The venom of Steatoda nobilis can cause a short-lived reaction, described as similar to a wasp sting, but occasionally it is longer-lasting and extends beyond the site of the bite.

In the UK, so-called spider bites are unlikely to be a reaction to the venom itself but are more likely to be the result of secondary infection of an initial skin lesion.

Given that Steatoda nobilis has been present in a large area of southern England for over a century, living in and around homes, the rarity of bites is an indication of the very low threat from this species. The threat is much less than that presented by wasp stings, or tick-borne Lyme disease, for example.

How to get rid of false widow spiders

If you want to get rid of the spiders, a thorough vacuum clean of the affected area will remove the webs and spiders from your house. If this isn’t possible, control may be accomplished by the removal of prey. This may involve the use of insecticidal sprays to control prey and predator.

Normally that seems to be sufficient. In the longer term, sealing potential harbourage points in high risk areas, such as in porches and conservatories, may further reduce the chance of contact with the spiders.

Some BPCA member companies may offer advice and possible treatment methods, however, some public health pesticides may not be approved for use in outside garden areas, or may not affect spiders. Alternative treatment methods may be applied, however, treatments methods will be at the discretion of the professional pest controller.

If you are experiencing problems from a species in which you can not identify with the UK and are worried, you can contact the Natural History Museum or your local RSPCA shelter for advice.